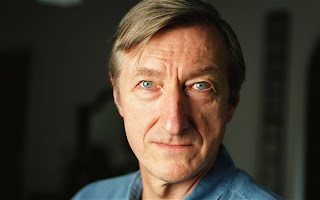 „The Incident with Uncle Leslie—the very first Incident of her life—came in a series of magic lantern slides. A sepia morality; the lovable villain even had a moustache. She had been seven at the time; it was Christmas; Uncle Leslie was her favourite uncle. Slide 1 showed him bending down from his enormous height to hand over a present. Hyacinths, he whispered, giving her a biscuit-coloured pot surmounted by a mitre of brown paper. Put them in the airing cupboard and wait until the spring. She wanted to see them now. Oh, they wouldn’t be up yet. How could he be sure? Later, in secret, Leslie unscrewed a corner of the brown-paper wrapping and let her peer in. Surprise! They were up already. Four slim ochre points, about half an inch long. Uncle Leslie emitted the reluctant chuckle of an adult suddenly impressed by a child’s greater knowledge. Still, he explained, this was all the more reason why she shouldn’t look at them again until the spring; any more light could cause them to outgrow their strength.

She put the hyacinths in the airing cupboard and waited for progress. She thought about them frequently and wondered what a hyacinth looked like. Time for Slide 2. In late January she went to the bathroom with a torch, turned off the light, took down the pot, unscrewed a tiny viewing hole, aimed the torch and quickly looked inside. The four promising tips were still there, still half an inch long. At least the light she had let in at Christmas hadn’t harmed them.

In late February she looked again; but obviously the growing season hadn’t started yet. Three weeks later Uncle Leslie called by on his way to play golf. Over lunch he turned to her conspiratorially and asked, “Well, little Jeanie, are the hyacinths hyacinth Christmas?”
“You told me not to look.”
“So I did. So I did.”

She looked again at the end of March, then—Slides 5 to 10—on the second, fifth, eighth, ninth, tenth and eleventh of April. On the twelfth her mother agreed to a closer examination of the pot. They laid yesterday’s Daily Express on the kitchen table and carefully unwrapped the brown paper. The four ochre sprouts had not advanced at all. Mrs. Serjeant looked uneasy.

“I think we’d better throw them out, Jean.” Adults were always throwing things out. That was clearly one of the big differences. Children liked keeping things.

“Maybe the roots are growing.” Jean started easing away at the peaty earth packed tight against the tips.
“I shouldn’t do that,” said Mother. But it was too late. One after the other, Jean dug out four upturned wooden golf tees.

Strangely, the Incident didn’t make her lose faith in Uncle Leslie. Instead, she lost faith in hyacinths.“

(Julian Barnes, Staring at the Sun)